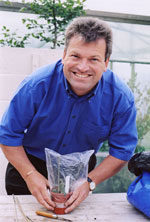 He has written several books including the recently revised ‘Matthew Biggs’s Complete Book of Vegetables’ which has been translated into five languages. Matthew has also contributed to two Gardeners’ Question Time Books, ‘Plant Chooser’ and ‘Gardening Techniques & Tips’, and was commissioned by the Eden Project to write ‘Gardening at Eden and how to do it at home’.

He lectures at the Royal Botanic Gardens Kew, Oxford University Botanic Gardens, the Cookery School of Michelin starred chief Jean-Christophe Novelli and is course Director of the Plants and Plantsmanship course at the English Gardening School.

This site uses Akismet to reduce spam. Learn how your comment data is processed.